All is not as it seems at Mottisfont Abbey.

For starters, despite the fact that for the last two hundred years or so the property has been known as Mottisfont Abbey, these days the National Trust (never knowingly ones to put tradition ahead of pedantic correctness) refer to it as simply Mottisfont. This is on the grounds that in medieval times it was only a priory, not an abbey.

I donʼt know what the locals think their village name being appropriated like this, but it is confusing to say the least.

Superficially it is a grand Georgian house, but if you look carefully you can spot the medieval priory that was incorporated into the fabric of the building.

The priory was founded in 1201, and was home to a handful of Augustinian canons, whose duty was to preach to the local community, minster to those in need, and welcome passing pilgrims.

In the house, only the Cellarium survives substantially unaltered. Outside the long canalised section of the River Test also dates from the time of the monks.

Predating everything on the site is the spring, after which the place is named. This large circular pool, which is reminiscent of the springs in the Bishopʼs Palace gardens in Wells, is the 'font' in Mottisfont.

The name probably derives from the Old English motes funta, meaning 'spring of the moot', or possibly 'spring near the confluence' (of the rivers Dun and Test in this case) which, given that it is a rather damp spot, seems more likely to me. 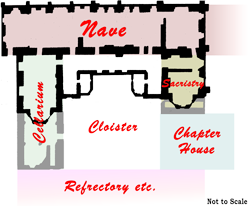 Although the priory suffered badly during the Black Death, it survived until Henry VIII dissolved it in 1536.

He sold the estate to his Lord Chamberlain William, Lord Sandys, who converted the priory into a grand Tudor mansion, turning the nave into what is now the main building.

Then in the 1740s, Sir Richard Mill, a descendant of William Sandys, demolished most of the Tudor mansion, added the South Front and converted what was left into the three story Georgian home we see today.

In 1835 the property passed to the Reverend Sir John Barker-Mill, a keen sportsman, who almost immediately built a fine stable block. After he died, the property was let, before being sold in 1934 to merchant banker Gilbert Russell and his much younger wife Maud.

The grand rooms on the first floor, which date from this period are also not always what they seem. Under Maud Russellʼs guidance the rooms were redecorated, making extensive use of decorating techniques such a marbling and graining. Itʼs a bit like wandering through an elaborate stage set.

This reaches its zenith in the extraordinary Whistler Room, where most of what appears to be plaster work is in fact trompe-lʼœil by the artist Rex Whistler. This was was Whistlerʼs last and finest piece before he was killed in 1944 on active service in France.

Look out for the two mosaic panels by Boris Anrep, one of the many artists, philosophers, designers and writers Maud Russell invited to stay at Mottisfont Abbey, and one with whom she had a long-lasting love affair.

On the top floor you can visit the maidsʼ bedrooms, and there is an exhibition space, the contents of which change from time to time. For details of the current exhibition, please see the National Trustʼs web site.

St Andrewʼs Church, Mottisfont (thatʼs Mottisfont the village, not the Mottisfont formerly known as Mottisfont Abbey, if you follow me) is an unremarkable little church.

Originally built in the 12th century, the chancel was remodelled in the 14th when the windows were replaced. The Victorians restored it in 1876 and again in 1888-90, but not too heavy-handedly.

It does, however posses a very fine clock which dates back to the 17th century. This has no clock face or pendulum, and is very similar to the one in Salisbury Cathedral.